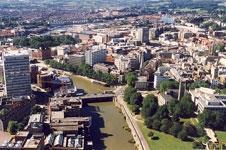 Birmingham, Liverpool and Hull at bottom of survey which ranks cities according to social, economic and environmental performance

Bristol has been labelled Britain’s most sustainable city, in a recent environmental survey.

Sustainable development organisation, Forum for the Future, works with the public and private sectors. Cities were rated in the survey on their social, economic and environmental performance.

Bristol beat 20 other cities in a league table which included London, Edinburgh and Birmingham, coming top due to its rise in recycling and composting rates. It also scored highly on water quality, waste collection and green spaces.

Newcastle rose up the rankings to become the only northern city in the top five but Birmingham, Liverpool and Hull remained at the bottom.

The survey is the Forum’s second annual Sustainable Cities Index, tracking the progress on sustainability in Britain’s 20 largest cities. It ranked cities on environmental performance, quality of life and future-proofing, and how well issues such as climate change, recycling and biodiversity were being addressed.

Commenting on the survey, a spokesperson for the organisation said: “It doesn’t mean that Bristol is a genuinely sustainable city,” said, the survey. “It’s just faring better across the board than others in the UK.”