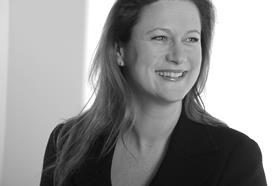 The British Council for Offices has named Katrina Kostic Samen as its next president.

Kostic Samen (pictured), who is the founder and managing partner at KKS Strategy, an all-female-led interior architectural practise based in London,

She formally took over from Ken Shuttleworth, founding partner of Make Architects, at the BCO’s annual general meeting.

Kostic Samen said a key part of her presidency would be pushing the BCO to become a more diverse organisation.

She said: “Twenty-one per cent of this year’s conference delegates were female, a significant increase on previous years, and reduced-cost tickets saw 81 NextGen delegates attend. Throughout the rest of my presidential year I will look to build on this success, and to support and mentor our female and NextGen membership in particular.”

Kostic Samen has also called on architects to ensure they are designing offices for diverse workforces.

She has challenged members “to move away from thinking in old fashioned terms about creating a building, and instead shift to a more diverse and inclusive world where the role of placemaking is central”.