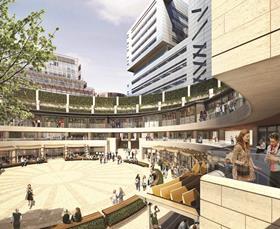 Developer British Land plans to keep its 50% stake in the Broadgate complex in central London, after reports that its joint venture partner may sell its stake.

British Land said it will work with investment fund Blackstone if it chooses to sell up, following a report in the Sunday Times that it is considering doing so.

British Land is behind the under-construction Make-designed headquarters for investment bank UBS at Broadgate and is pushing ahead with Arup-designed plans to redevelop the complex’s arena and UBS’ old headquarters at the adjacent 100 Liverpool Street building.

The whole Broadgate complex was awarded immunity from listing this month.

British Land said: “The estate remains an integral part of our long-term London strategy. We intend to retain our 50% stake and work closely with Blackstone through any sale process.

“We have a strong vision of how Broadgate will develop as a vibrant mixed use estate in the heart of the City of London and expect it to benefit from its position around one of London’s most important transport hubs and from the completion of Crossrail in 2018.”

In a trading update for the fourth quarter of 2012, the developer said it had made progress on a number of planned developments.

The firm completed the acquisition of former MI5 office Clarges in west London and is “on track” to submit a revised planning application for its redevelopment.

The developer also agreed £90m of forward funding for a 310,000 sq ft scheme in Hereford city centre and signed a development agreement with Lancaster City Council for a 10-acre retail-led scheme in the city.

The developer made progress in pre-letting its under-development office scheme, which are now 62% pre-let, including the Rogers-designed Cheesegrater tower in London, now 50% pre-let.

“We’ve continued to see good demand for our properties, which means our occupancy remains high and our developments are now significantly pre-let well ahead of completion.

“While we remain cautious about the near-term environment, we are confident that British Land is not only defensive in today’s challenging markets but also well positioned to deliver future growth from existing and new investments.”