Britons' bid to catch out burglars 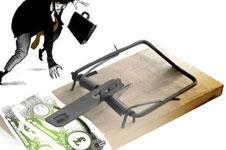 Britons have booby-trapped around one million of their homes in a bid to catch out burglars.

One in 20 householders said they had created rigging devices which included inserting holes in floorboards, loose stairs, garden pits and hidden trip wires, a report in the Daily Mail said.

However, the homeowners are reportedly risking jail by setting up these traps as it is illegal to set a snare which could injure or kill an intruder.

More than 2,000 people were questioned in a survey by insurance firm Direct Line. In extreme cases, property owners were found to have set up nail bomb traps.