Manchester developer Bruntwood Works has committed on a £3m upgrade to a landmark office building in Liverpool in the latest sign of continued confidence in the office market.

The Plaza building, which was built in 1965, is set to get an extensive 1960s-style makeover in defiance of industry fears of the demise of office working following the success of working from home during covid-19 restrictions. 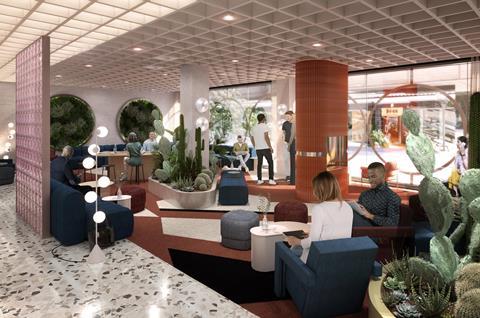 Interior architect Phaus has been appointed for the scheme, which Bruntwood Works said has been designed to encourage ”collaboration, community and productivity”.

CubicWorks, the developer’s contracting arm launched in October, is on the team as main contractor.

Upgrades to the 65m tall block include a coffee shop, “destination” restaurant, pop-up retail space and cocktail bar on the ground floor, along with new study spaces and a wellness studio for fitness classes.

Bruntwood Works is the owner of the 18-storey building, which was formerly the headquarters of retailer and football betting giant Littlewoods before the latter’s collapse in 2004.

The scheme is set to complete by summer next year.