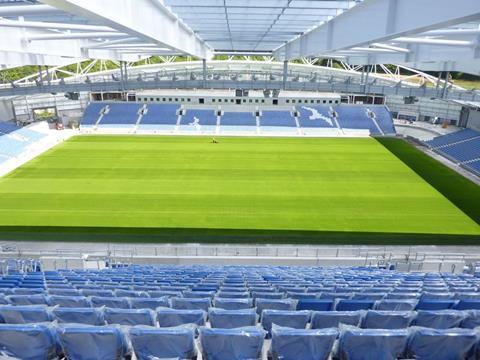 Buckingham Group has completed a hat-trick of major sporting venues in a month, after handing over the 22,500 capacity AmEx stadium to Brighton Hove Albion football club.

The stadium hand-over comes less than a month after the Midlands contractor completed the new paddock complex at Silverstone race track and the London 2012 handball arena.

The combined value of all the sporting venues completed was £130m.

The £75.5m American Express Community Stadium will be home to newly-promoted Brighton Hove Albion, who will play Championship football after clinching the League One title last month.

Brighton will play their first match in the new stadium on the 30th July, when they will host Tottenham Hotspurs in a pre-season friendly match.

The stadium, designed by architects KSS, has scope for future expansion by extending the venue’s east stand to increase its capacity to 30,000 seats.

It incorporates hospitality and banqueting facilities and is expected to host other sporting events and music concerts.

The 6,500 capacity arena will host handball and modern pentathlon during the games and will provide a multi-use sports centre after the games. It features a unique naturally lit roof with 88 rooftop sun pipes.

Paul Wheeler, chairman of Buckingham Group, said: “This period will go down as one of the proudest in our history as we successfully complete and handover three major sporting venues.

“It makes us all proud to be associated with the successful delivery of three unique and iconic buildings. We can all look forward to more of the same in future.”

Martin Perry, chief executive of Brighton Hove Albion football club, said: “They have done a superb job and given us a first-class stadium, which I believe is unrivalled in the UK and one the club and fans can rightly be extremely proud to call home.”