﻿A reformed planning process, railway funding and more green investment were the positives

Despite the construction sector being identified as one of the key areas of the economy for growth, Wednesday’s Budget was a mixed bag for the industry as a whole.

The chancellor announced a new shared equity programme to assist first-time buyers and reform of the planning process, but the focus is on new-build, rather than the secondary market.

And the lack of an announcement on stamp duty land tax incentives for retrofitting homes will be seen as a missed opportunity for many contractors.

However, there was some good news for infrastructure, with about £200m of new funding for railways announced, as a result of efficiency savings, together with a further £100m to deal with winter potholes.

And there were some positives on the green energy front, with £2bn made available through the Green Investment Bank and certainty resulting from the creation of a new carbon floor price. 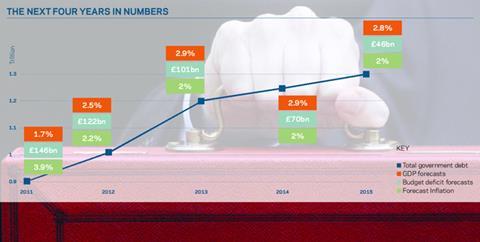 George Osborne’s Budget for “enduring growth” included £210m of help for first-time buyers, and pledges to encourage investors into the private rental sector.

Major housebuilders responded positively to the FirstBuy scheme, which in effect re-instates Labour’s HomeBuy Direct policy. The scheme will see government invest 10% of the cost of a house, matched by the developer. Berkeley Group chairman Tony Pidgley said: “This has got to be very welcome indeed, it’s very pleasing that they’ve responded to our concerns.”

However, Roger Humber from the House Builders’ Association, said: “It’ll only help the three or four big housebuilders with the balance sheet capacity to invest”.

In addition the government pledged to use the Homes and Communities Agency to make public land available free to developers on a “build now pay later” basis.

Developers will only pay for the land once homes are built, and departments will have to publish land release schedules, with 20,000 homes possible on MoD land.
There will be a trial of land auctions to encourage development, but this will be restricted to public land.

Stamp duty will be charged on the bulk purchase of homes for rent at the rate of the individual homes, not the rate of the transaction, which could reduce the cost of buying
large portfolios.

A number of changes were announced to planning laws, most of which had been widely trailed in advance. The most surprising was a pledge to guarantee a decision on all planning applications, including appeals, within one year. Ian Tant, partner at Barton Willmore, said it was unclear how the government will achieve this without reducing the six months developers are given to pull together appeals. “There could be a sting in the tail here,” he said.

The government will consult on allowing changes of use from industrial and office to housing without specific planning permission, a move welcomed by housebuilders, but which is not expected to create a massive change.

Ten local authorities are to pilot a new wave of enterprise zones, which will see greatly reduced planning regulations. Other councils will be encouraged to bid to create 21 zones in total.

Local authorities will also now be free to set the level of development required from brownfield land, instead of the current blanket 60% requirement.

”Two out of 10”, is how Paul King, chief executive of the UK Green Building Council, rated the Budget for sustainability. Reform of the definition of zero carbon housing means it will only cover heating, lighting and water, rather than electrical appliances. Housebuilders will have to reach code level 5 rather than code level 6, saving about £2,000-3,000 per home.

King said: “The world leading commitment that new homes would not add to the carbon footprint of our housing stock from 2016 has been scrapped”.

There was £2bn more for the Green Investment Bank, taking its total pot to £3bn. It will start lending next in 2012, a year earlier than expected. Yet it will not be able to borrow until 2015-6, and only if wider deficit targets are met. Matt Fulford, head of buildings at green consultancy Sustain, said that this raised questions about how much money it was actually likely to raise.

There was further delay on the Green Deal. Osborne said he would launch incentives to get homeowners to take up the deal, but gave no detail. The anticipated stamp duty incentive did not appear in the chancellor’s speech.

The government reaffirmed that it will fund demonstration carbon capture and storage plants, but from general taxation rather than a levy on energy companies.

No significant changes to the investment programme were revealed with the Budget largely confirming the spending review. The chancellor did announce an extra £200m investment in regional railways - with schemes in Manchester and Swindon being the biggest beneficiaries.

Local authorities will receive an additional £100m to repair winter potholes on top of February’s initial government injection of £100m.

The cost of fuel will be cut by 1p with a Fair Fuel Stabiliser being implemented to keep costs down in the future. Funds for the FFS will come from an increased levy on oil and gas production.

Capital spending for 2011-12 was stated at £5.1bn, which is £0.2bn higher than the amount allocated in the Comprehensive Spending Review last year. This is a carrying over of funds allocated for 2010-11, when the estimate of money spent, at £7.3bn, was £0.3bn below that expected. It is likely that some of this was due to savings made on the academies programme as a result of the government’s cost reduction exercise. The Budget was scant on detail on specific programmes - this will come with the Sebastian James review, expected within the next few weeks. But £150m of new capital funding was promised to create at least 12 more university technical colleges, doubling the current number.

Analysis: Will there be positive change?

There are quite a few things to be positive about after the Budget. The higher than expected reduction in corporation tax and the change in fuel duty will be positive for the sector, as will an extra £2bn investment in the Green Investment Bank, which is also to be welcomed. The focus on the planning regime and assistance for first time buyers, which could help 10,000 people get on the housing ladder, is very good news. It shows the government recognise the issues and are doing something about it.

The Budget seems to have focused a lot on construction and the changes are positive. It’s too early to say if it will have any effect on our forecasts but at this stage I would say not. Previously, we were looking at reducing our forecasts in the private housing sector because of a fall in consumer confidence and changing perceptions about house prices but help for first time buyers are likely to offset that weakness.

While there are a number of positive developments, we are disappointed there is nothing to stimulate the work that needs to be done on refurbishing the existing housing stock.