Building collapse in Kenya kills at least one person 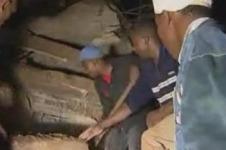 At least one person has been killed and dozens left trapped following a building collapse in Kenya.

The multi-storey building, situated on the outskirts of Kenya’s capital, Nairobi, had been under construction when the building collapsed.

Officials from the Red Cross said 15 severely ill people had now been taken to hospital after being pulled from the rubble, the BBC said.

It is unclear why the five-storey building collapsed, though BBC correspondents said Kenyan building companies are often criticised for flouting safety regulations. One eye witness said he heard a loud bang as the building cracked before it collapsed.

It was suggested that a recent bout of heavy rain in the area could have weakened the structure.

Up to 50 workers are believed to have been on site, though officials said an unknown number of people could still be in the building, and the rescue operation continued late into the night.

It is understood several of those trapped used mobile phones to call relatives.

One BBC correspondent said calls had been made previously for stricter building regulations to be enforced, following the collapse of other structures in recent years.

But Nairobi is currently in the midst of a construction boom and companies are often believed to cut safety corners.