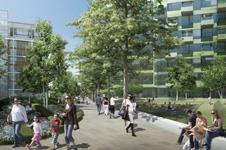 Candy & Candy could freeze the £1bn redevelopment of its Chelsea Barracks site unless planning conditions are relaxed.

Nick Candy, the developer’s co-founder, said it had been “far too generous” so far in the planning settlement it had offered to Westminster council for the luxury scheme. The firm is now working on a revised planning application for the 638-flat development.

When asked if he was thinking of lowering the 50% affordable housing ratio to make the scheme viable, he said: “Yes. There needs to be a reality check.”

According to Candy, the Qatari ruling family is financing the project, so it is not suffering from funding problems like other major regeneration schemes are.

He added that the nature of the funding meant the investors did not need an immediate return.

“I don’t need to build this – I’m happy to mothball it,” he said. “The Greater London Authority needs to realise it is in the privileged position of actually being able to build something during the credit crunch.”

Candy & Candy is famous for its range of housing for the ultra-rich, including One Hyde Park in Knightsbridge, which includes the first flat in London to be sold for more than £100m.

The Chelsea Barracks scheme, which has been controversial because of its size and Rogers Stirk Harbour + Partners design, was last month sent back to its designers by the council to be reduced in scale or set further back from the road. Sir Robert McAlpine and Bovis are vying to build the project.

Candy also admitted the firm had frozen its Noho Square scheme in central London, because of lack of finance.

Candy has denied reports that the Qatari family is considering backing out of the Chelsea Barracks scheme.