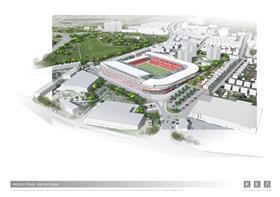 The football club is working up plans to redevelop Ashton Gate into a 26,000-seat venue, after plans for a £60m new-build 30,000-seat venue at nearby Ashton Vale were thrown into question by a public inquiry. The inquiry will reopen in October.

Bristol City’s preference is to build a brand new stadium but it is progressing the Ashton Gate plans as a backup.

Plans for the revamp will be presented to Bristol City Council for approval in the summer.

Two stands would be demolished and rebuilt, while the other two would be renovated.