Minutes show accounting entries “were in the balance sheet, but in the wrong place” 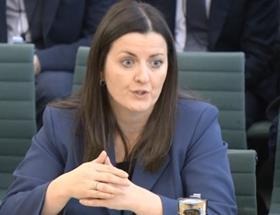 Carillion’s last group financial director Emma Mercer blew the whistle on the way accounts had been kept before taking up the post, according to minutes from a meeting last May of the company’s board.

Mercer (pictured), who had been working as FD of construction services for six weeks since returning to the UK business from Canada, told UK managing director Adam Green last April that she had identified some accounting issues she was not comfortable with.

The minutes from the 9 May meeting show Green alerted then chief executive Richard Howson to her concerns on 15 April and Green asked group finance director Zafar Khan to discuss the accounting position with Mercer.

On 3 May, Mercer raised her concerns with group HR director Janet Dawson, before Howson met with Mercer two days later.

Allison Horner, chair of the remuneration committee, said: “Mrs Mercer appeared to be a whistle-blower who did not feel she was listened to – hence her conversation with Mrs Dawson.”

Speaking at the meeting board audit committee chair Andrew Dougal noted “that the situation appeared to be that costs had been offset by negative accruals, which should have been included in ‘other debtors’.

“Even though, for example in Battersea, there was a view that a recovery could be made, it was not put in debtors. In other words the entries were in the balance sheet, but in the wrong place. They were included, and the net working capital was not misstated, but the gross figure was.

“In essence, creditors had been reduced rather than debtors increased, which did not appear to have been flagged up in the normal way and so denied to management.”

In minutes from a board meeting on 15 May, it was revealed that it had been agreed that “the independent accounting review of the 2016 year-end position in relation to the contracts envisaged as party of the four-stage review will not now be required. The plan will proceed on the basis of a three-stage review comprising the internal review, the KPMG review and the sub-committee of the Board chaired by Andrew Dougal.”

The review concluded that the 2016 year-end position did not need to be restated. KPMG audit partner Peter Meehan said he “did not believe that there was an intent to deceive, but rather was due to incompetence, negligence or sloppy accounting”.

The co-chairs of the inquiry into Carillion’s collapse have slammed the board for its inaction in the wake of the revelations.

“That the next chief financial officer had to go through whistle blowing procedures to get her concerns about accounting irregularities taken seriously by the Carillion board is extraordinary. So too is that the board’s response was to reject an independent review and get KPMG, their pet rubber-stampers, to mark their own homework.”

Rachel Reeves, chair of the business committee, said: “Carillion directors say they couldn’t foresee what investors and company staff could – that spiralling debt problems and failing contracts were destined to sink the company.

“These board minutes point to a very different scenario – Emma Mercer was sounding the alarm but none of the Carillion directors were willing to wake up and listen”.

The inquiry has written to Mercer seeking additional information. 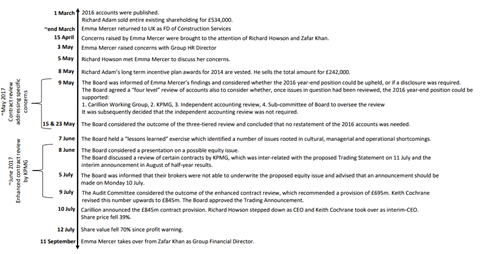