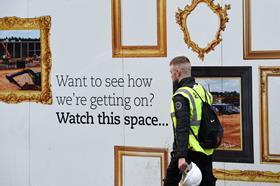 Carillion was using recently awarded government contracts – including two jobs on the HS2 railway – to convince thousands of suppliers to stick with it, new documents reveal.

According to a supplier briefing update sent out on 21 July last year – 11 days after it announced an £845m writedown – the firm said government awards, which also included FM work at more than 230 Ministry of Defence sites in northern England, Scotland and Northern Ireland, were “a sign of the confidence that our key customers have in our ability to meet their requirements”.

The deals emboldened the firm to send out the supplier briefing note in which it said the firm was “committed to business as usual”.

In the note, seen by Building, Carillion wrote: “We continue to be committed to business as usual with all of our partners, suppliers and stakeholders, including adherence to all payment terms.”

It told suppliers that it had begun a cost reduction programme as part of a restructuring but reassured them its future trading was “underpinned by our order book and ability to win good work”, promising it had “good revenue visibility for 2017 and beyond”. It added: “It is important to highlight that Carillion (including Carillion Construction) remains well financed and trading within our banking limits.”

Following the firm’s collapse last month, the government has been accused by opposition MPs of inflating confidence in Carillion by handing it lucrative contracts in the days after last July’s writedown.

Last month shadow transport secretary Andy McDonald said his opposite number in government, Chris Grayling, had “got it spectacularly wrong” and that “his judgment and […] confidence were disastrously misplaced”. But Grayling said: “I don’t accept that at all. At the time, I reviewed those carrying out the contracting very carefully.”

And in a parliamentary debate on the day Carillion went under, Labour’s shadow minister for the cabinet office, Jon Trickett, said the government was “recklessly complacent” in awarding Carillion contracts “despite all the information that has clearly been in the public domain”. He added: “Why was it apparent to everyone except the government that Carillion was in trouble?”

Rudi Klein, chief executive of the Specialist Engineering Contractors’ Group, said suppliers who received the letter ended up being duped. “That was the whole point of it – it worked,” he added. “They were selling the idea of ‘Come on guys, everything is alright, everyone has confidence in us and so must you’.”

The latest session of the parliamentary inquiry into Carillion’s collapse is due to take place later this morning, with representatives from its auditor KPMG, including the accountant’s head of audit, Michelle Hinchliffe, and the Pensions Regulator set to face a joint committee of MPs.