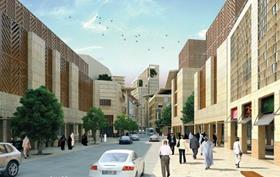 Carillion is conducting an immediate review of allegations that migrant employees of sub-contractors working on its Msheireb Downtown Doha project in Qatar are being underpaid and housed in poor conditions.

An investigation carried out by BBC Newsnight spoke to workers on the £400m Msheireb Downtown Doha project (pictured), being built by a Carillion-led joint venture.

Various workers complained to Newsnight that sub-contractors on the job had paid them less than promised, that they were not paid on time, passports were withheld and cited poor safety practices.

A Carillion spokesman said the company was “surprised” by Newsnight’s allegations.

He said: “We do everything we can to safeguard the health, safety and wellbeing of our people in Qatar, including employees of our subcontractors.

“As a leading support services and construction company, Carillion sets best in class standards for our people’s health, safety and working conditions wherever we work.

“Carillion is deeply concerned and surprised by the claims made by Newsnight concerning one of our subcontractors and one of their sub-suppliers in the programme broadcast on the 8th December. We are conducting an immediate review of these claims to establish the position and take appropriate action.”