Work on Newport complex to finish in 2019

Major party political conferences could be held at Celtic Manor after it was confirmed John Sisk will begin building a new £84m international convention centre at the Welsh resort this March.

The complex just outside Newport, which hosted the Ryder Cup golf tournament between Europe and the US back in 2010, said it also expects to be able to bring conferences from around the world to the venue.

Resort chairman Sir Terry Matthews said: “This centre will allow us to attract the biggest and most lucrative business events to Wales, as well as high-profile summits and party political conferences.”

The centre, which will be able to host 5,000 delegates, will be delivered and managed via a new joint venture company in which the Celtic Manor Resort and the Welsh government have an equal 50% stake.

It will include a 1,500 seat auditorium and separate exhibition hall capable of hosting 2,400 people for a gala dinner. Architect on the scheme is Scott Brownrigg. 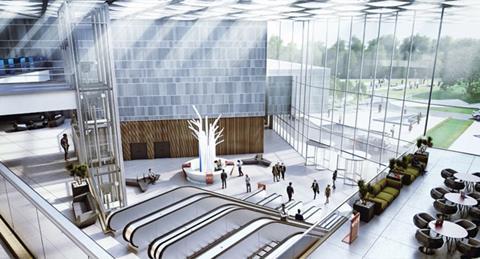 The centre will be able to host 5,000 people