Over 2,000 piles will be installed as part of the section, which will run beneath two new bridges at Hampstead Road and Granby Terrace. 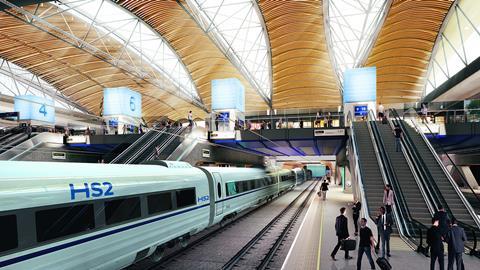 Architect’s vision of the high speed platforms at Euston station

The job was awarded by the SCS Railways, a JV between Costain and Skanska and Austrian tunnelling contractor Strabag, which is building 26 miles of tunnels leading from Euston to the outskirts of London via Old Oak Common station.

The works, which are expected to employ around 100 Cementation staff, are scheduled to be completed in 2024.

Skanska has tried to offload £62m turnover Cementation twice since 2018 but opted to keep it when it failed to find a buyer for the price being offered.

The huge underground box, which has the volume of 55 Olympic swimming pools, will allow trains approaching and departing from Old Oak Common station to swap tracks at speeds of up to 62km/h.