The race to build two high-profile jobs in London has narrowed with the contest to build the next phase of the Chelsea Barracks scheme down to two while a winner is set to be named on another tower in the Square Mile.

Building understands Multiplex and Mace have received tender documents from developer Qatari Diar for the fourth phase of the £1bn redevelopment.

A third bidder, Vinci, is believed to be no longer in the running for the £200m deal which is for shell and core only with fit-out being tendered separately.

Multiplex was pulled from the job just days before it was due to start work back in February while Mace has been working on the first three phases of the development.

The fourth phase has been designed by Eric Parry Architects which earlier this applied to increase the number of homes at in this phase to 97. 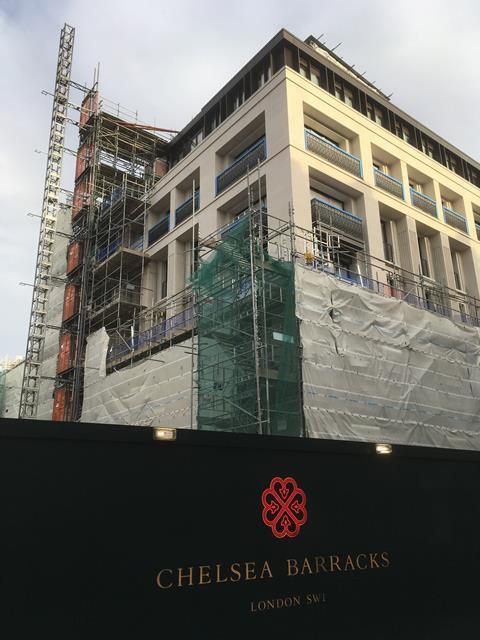 But Multiplex and Mace are among the firms to have been pipped for the £300m deal to build a new tower in the Bishopsgate area of the City of London.

Lendlease, which is currently on site with the nearby 150 Bishopsgate scheme, a hotel and apartments complex, is believed to have picked up the deal for the 50-storey tower.

It is being developed by Japanese firm Mitsubishi Estate with Stanhope development manager.

One source said: “We were told it would go to Lendlease so a bit of a waste of time. McAlpine made some noises on the job but I think heard the same thing.”

Designed by Wilkinson Eyre, the tower at 6-8 Bishopsgate was originally due to be 40 storeys but was extended by a further 10 with planning for the revised scheme being given last October.

The office-led tower retains its stepped concept and a public viewing gallery in a rooftop pavilion with the new floors adding an extra 120,000 sq ft of office space.

Arup is the structural and services engineer and Alinea the cost consultant.