Chinese contractor goes all out to meet global goals 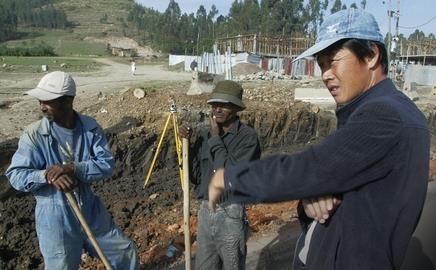 Sean Li is quite calm as he mentions during a conversation in his office in north-east Beijing the fact that his company is in discussions with Equatorial Guinea about a deal to “design and build several new cities” in the oil-rich West African state.

For most contractors this would be a once-in-a-lifetime deal, not to mention possibly a risky one, given the country’s description, by several human rights organisations, as one of the most abusive regimes in Africa. But Li, the vice president of overseas operations at China State Construction (CSCEC), is matter-of-fact. His company is the largest contractor in China and is no stranger to controversy, having already completed schemes in Libya and Iran as part of an expanding international roll-call of projects that now stretch from Shanghai to South Carolina.

“The initial deal we have signed in Equatorial Guinea is just the first step there,” he says. “The contract is for one city just now, but the next step is to build everything for them. We are going to do roads, schools and hospitals, and will spend about seven years planning it all. It will go on site within two years. They are going to pay for this with their oil money.”

This is the cornerstone of CSCEC’s burgeoning international expansion drive.

Li freely admits that the sprawling conglomerate – it employs 122,500 staff in businesses ranging from rail to ports – follows where the Chinese government leads in its thirst for a secure supplies of raw materials to fuel its economic boom. “Our international expansion tends to follow Chinese investment banks,” he says. The main one in Africa is China Exim Bank which the World Bank estimates has invested more than £6.5bn in sub-Saharan Africa in recent years.

Li says: “We are now in discussions with a southern African country about a deal similar to that for Equatorial Guinea, but it all depends on whether or not the Chinese banks agree a loan deal. This will mean they have the money to pay.”

The Middle East is one area where, as many UK firms who work there will testify, the Chinese pioneered their “oil for infrastructure” approach. As Joseph Lee, head of Davis Langdon (China), says: “I think it is a good thing as it shows that Chinese contractors have now acquired enough skills to do more complex buildings … They work out there by exporting a large number of workers to the Middle East and Africa.”

Li says he tries to use a minimum of 30% of Chinese labour on any project overseas as the workers are cheap and he can rely on them. African and Middle Eastern countries such as Dubai and Abu Dhabi have no qualms about this mass immigration. “Dubai is very good for us, we have 10,000 staff there,” says Li. He admits, however, that Europe is a different matter: “We have had some requests from potential customers in the UK and other European countries, but I can’t ever see us going there owing to the labour issue.”

Although perhaps not in Europe, the blue CSCEC logo will become an even more familiar sight around the world if, as expected, its long-awaited flotation proceeds this month. It will raise RMB40bn (£3bn) for 12 billion shares in the world’s seventh largest contractor. “We have been planning this for three years,” says Li. “We will use the money for investing in China as well as Hong Kong and Macau. We will still focus on construction but will look to invest in land and other companies. It is cheap to buy land and medium-sized companies in America now. If we have the money, we will go in fast.”

Li will hope, however, that his recent experience in the Philippines is not repeated. “As I understand it the World Bank is on the verge of saying that 20-30 contractors [including CSCEC] that worked on one of its highways projects are corrupt and shouldn’t be worked with. This is owing to a row over what happened to certain funds. This is not a big problem for us as we don’t have that much business from the World Bank. But we will fight it – we have to protect ourselves.”

Despite this setback, Li is keen to continue the company’s rapid overseas growth, although he says there are “no targets” in particular. The sole requirement appears to be CSCEC’s ability to compete with cheap labour, although there is a looming threat as inflation in China (8%) is making it more expensive to export labour. But for now, CSCEC is focusing on Africa, with one rather revealing caveat. “We would go wherever we can to work so long as there is no danger to our staff,” says Li.