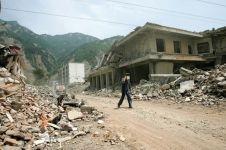 Planning authorities claim no evidence of negligence in death of 5,335 schoolchildren in Sichuan earthquake

Chinese officials say there is no evidence that human negligence caused thousands of schools to collapse during last year's earthquake.

More than 14,000 schools were badly damaged in the magnitude-eight quake which ravaged the Sichuan province, despite other nearby buildings remaining intact. Several parents of dead and injured pupils demanded an investigation, after they blamed the collapses on poor construction. But the government has rejected accusations anyone was responsible for the school's collapse.

Official figures released on Thursday showed a total of 5,335 schoolchildren were killed when their classrooms collapsed, the BBC said. Schools were the only buildings to fall in some cases and parents claimed government attempts to cut costs had resulted in poorly constructed buildings.

According to news reports, Beijing officials investigated the accusations and initially suggested they could be true. But senior planning official Tang Kai has now said there was no evidence of human negligence leading to the collapse of any building, or any school. He admitted the investigation into collapsed schools had not been easy as investigators had been forced to rely on the original design plans to check the buildings had been built properly.

Some parents remain sceptical, however, and say they believe the government has never really been serious about the investigation into why so many schools were damaged.