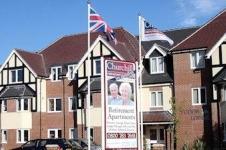 Churchill will build new developments worth a total of £20m in Surrey, Gloucestershire and the West Midlands. The developments in Epsom, Emsworth, Hindhead, Gloucester and Stourbridge will represent 180 new residential units. The company said it would also begin replenishing its land bank.

Spencer McCarthy, chairman and group managing director of Churchill Retirement Living, said it was too early to talk about “green shoots” but that the bottom of the market was in sight.

He said: “It will be very much a case of “steady as she goes”; far from being out of the storm this could well just be the respite as we pass through the eye. We have a long way to go yet.”

Churchill is run by the sons of John McCarthy, the co-founder of McCarthy & Stone. It posted a loss of £2.4m in March this year, but said it has shored up its finances through new facilities with banker HSBC.