Skills body forecasts ‘major comeback’ for the construction industry, with 200,000 extra posts set to be created by 2019 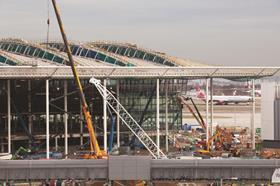 The construction industry should be preparing for five years of consistent jobs growth with 200,000 more workers needed in the sector by 2020, a new report has said.

According to the latest Construction Skills Network report, investment boosts in housing, leisure and infrastructure will deliver growth in every region, giving UK construction year-on-year average growth of 2.9%.

The report authors said Wales is predicted to be the fastest growing region, with output growing 6% annually over the five years, but the pace of growth in Scotland is slated to slow from 2% to 1.1% per year because of completed infrastructure projects including the M8 and Commonwealth Games venues.

The CITB has revised up its forecasts for jobs growth by 8,000 per year compared to its 2014 forecasts, so it now expects the industry to need 44,690 jobs per year over the forecast period.

CITB director of policy and strategic planning Steve Radley said the 2015-20 forecast showed the construction sector was on course for “a major comeback” that would make a positive impact on the wider economy.

But he called on politicians to help the sector deliver enough training to ensure young people benefited from the opportunities that would be available, and commit to the planned delivery of infrastructure projects in the next parliament.

“Leisure, infrastructure and housing are all driving growth, but this brings with it new challenges in meeting skills demand,” he said.

“Employers will need to pull every lever available to them to meet the skills challenge they face, but government can play a vital role in giving them the confidence to invest in training for the long-term.

“CITB is already identifying future skills needs and working with government and industry on the talent pipeline. But to help it plan ahead, industry needs a clear commitment from all political parties in the run up to the general election that infrastructure projects will be delivered on time and to plan in the next parliament.

“Government can also help employers to develop the next generation of workers by sending out a clear signal that it will make it as simple as possible for companies of all sizes to invest in apprenticeships.”