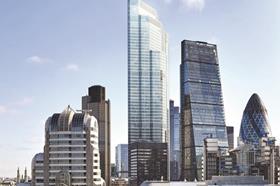 The developers behind 22 Bishopsgate have won the backing of a key City of London Corporation committee for a plan designed to ward off right-to-light objections and speed construction of the proposed 62-storey tower.

Lipton Rogers won planning permission for the building, designed by PLP Architecture, in November. Destined for the site of the long-stalled Pinnacle tower, the new structure would be the City’s tallest office block, with around 200,000m2 of floorspace.

However, the developer subsequently expressed fears that negotiating right-to-light agreements with neighbouring landowners would cause delays to construction and asked the City to use its powers under the Town and Country Planning Act 1990 to assist.

Lipton Rogers said it expected the project to come under threat from a “large” number of right to light objections from neighbouring property occupiers, and pointed to a need to place substantial pre-construction orders for materials and procure the main build contract to hit its 2018 completion target.

Members of the City’s planning and transportation committee yesterday (April 5) agreed to support the acquisition of a temporary interest in the site, under Section 227 of the act, which would allow development to commence under other provisions of the act while rights-to-light agreements are finalised.

In a report to the meeting, chief planning officer and development director Annie Hampson said agreeing to the proposals would “facilitate the carrying out of the development which will contribute to the achievement and the improvement of the economic well-being of the City as a whole”.

The decision to proceed still needs to be ratified by the City of London’s policy and resources committee, and would ultimately be delegated to the authority’s town clerk.

A City of London spokesman said the corporation used its powers “sparingly” and only after careful consideration.

“In this instance, the view of the committee was that their decision was justified and this is was a major development which will result in significant improvements to the local area, increased floor space and help create jobs,” he said.

James Souter, property ligation partner at law firm Charles Russell Speechlys, said the City’s decision could be viewed as “surprising” given that it came so soon after planning permission was granted.

“However, I don’t expect that this case will open the floodgates to further use of these powers by the City of London Corporation or other local authorities,” he said.

“Rather, this is a case where the use of the powers was justified in the eyes of the committee due to the high profile nature of 22 Bishopsgate and its significant value to the City.”

The City also used its temporary land-acquisition powers to facilitate the development of 20 Fenchurch Street.