Aecom’s share price spiked after it announced a 21% boost in revenue last week in quarterly results to the New York Stock Exchange. But since US consultant URS snapped up Scott Wilson last June - starting a US buying spree of UK firms - the big fish on the other side of the pond has been a bit lacklustre, writes David Matthews.

Aecom, which has a $6bn turnover, has been growing rapidly, and the acquisition of Davis Langdon last year was just one part of its exponential rise. But last week’s results showed that net income was down by about 2% from the same quarter last year, from $59m to $58m. It would have been up 15%, had it not been for an evacuation of staff from Libya that cost $10m.

Aecom’s diversity has been seen as a strength by analysts, but this global reach has left the company vulnerable to the potentially unstable markets in North Africa and the Middle East.

Andrew Wittmann, an analyst at Robert W Baird & Co, says: “They do about half of their business outside the US and have a wide variety of end markets. They have a significant presence with governments, but also exposure to some commercial clients as well”.

As Aecom admitted in its results presentation, “local unrest slows emerging regions”, but “bolsters infrastructure opportunities in established areas” - in other words, nervous autocrats will be keen to appease their growing populations with shiny new infrastructure.

Aecom and URS, the two firms that have acquired major British companies in the past year, have been outperformed by the US stock market. However Fluor, another engineering giant, saw its profits rise on the same day that Aecom’s fell.

So can acquisition-wary UK firms relax, believing that the big fish are floundering? Certainly not. The latest results prove that Aecom is still going full steam ahead for revenue growth. 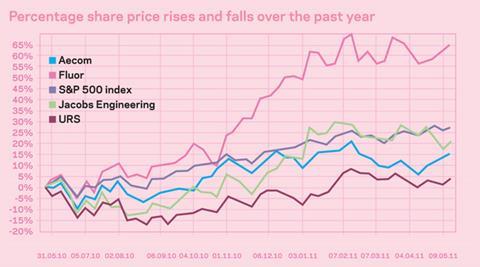