Carillion has been the contractor to watch over the last week, in the wake of last week’s shock announcement it was putting 4,500 workers on notice because of the government’s reversal over its feed-in tariff policy.

Shares in the £5bn turnover firm fell as much as 6% on the news, which featured heavily in the national press after www.building.co.uk broke the story on Wednesday, as shareholders digested what it meant.

The news is particularly sensitive for Carillion having paid £300m just six months ago for the firm, Eaga, that became its energy services division. Putting all of the staff on notice of redundancy less than six months later doesn’t leave investors lining up.

The FITs work had been expected to generate £200m of contracting revenue, and £50m of maintenance revenue, from Carillion’s first solar power installation scheme. Only a fraction of that figure will materialise.

As one analyst said, if significant lay-offs and write-downs of value do result from this, it has the potential to call into question the soundness of Carillion’s entire acquisition strategy. After all, the decision to cut the FITs rate was hardly unexpected.

However the market has since calmed itself - the share price didn’t even fall to the level of the previous week’s low, before recovering to close at its pre-redundancy level. Shares then surged further after Carillion issued a trading update on Wednesday, despite admitting it has put an extra £20m aside to cover restructuring in the division.

After all, Carillion has 50,000 staff, and can say that the work it had been hoping to get from the solar PV sector was not key to the future of the business.

Carillion’s view is that the long-term reason it bought Eaga - to provide energy services - is still valid. Andy Brown, analyst at Panmure Gordon, said: “It gives investors a reason to sit on their hands and not buy stock. But it doesn’t derail what Carillion is about, or the whole Eaga purchase.” 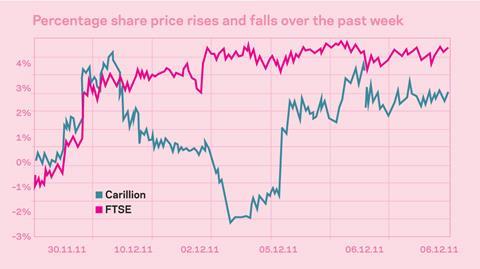