Citywatch: Writing back and signing off 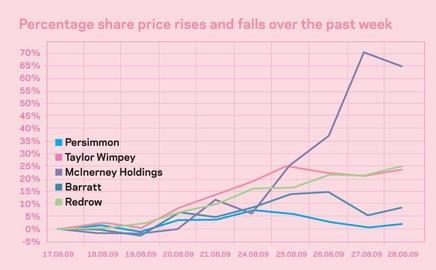 As the dozen or so housebuilding analysts filed out of their meeting with Persimmon last Tuesday, there was some head-scratching over why it had written back the value of its land by £28m in its half-year results

From an ornate hall attached to the offices of Merrill Lynch in St Paul’s, some decamped to a nearby pub to discuss the matter further.

The company said the write-back, which indicated that it had been too zealous with previous writedowns, was simply the way the numbers had fallen when the KPMG auditors got their clipboards and calculators out.

Nobody thought this signalled the start of the recovery, but some were puzzled by a move that, owing to the inctricacies of accounting, would make their margins look weaker when the recovery came.

Kevin Cammack at Cenkos Securities suggested the firm may have done it to set a benchmark that would make it more difficult for distressed rivals to use heavy writedowns to enhance their own recovery when the market turned. “Clever boys, if that’s the case,” he said.

There was certainly no margin for interpretation at AIM-listed Irish housebuilder McInerney, which wrote down its landbank by £137m this week, thereby falling into negative equity. The group’s lenders, it told the City in the now-familiar refrain, “continue to be supportive”.

Away from the Square Mile, profit at Halcrow plunged 57% to £12.4m, owing to late payments in Dubai. The fall was despite an overall 21% rise in turnover to £468m.

Halcrow said it would bid for work in Saudi and Libya to offset the drop. And before anyone mentions the Lockerbie bomber row and how UK firms could use it to boost trade with the Colonel, we should point out the accounts were signed off in June.