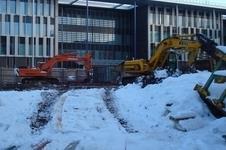 The recent cold snap has cost UK businesses and householders an extra £1.2 billion in heating according to estimates by Faithful + Gould.

The study showed that the residents of an average poorly-insulated three bed semi-detached house would have spent an extra £37 keeping their house warm over the fortnight. If all UK homes used the same amount of additional energy as the average, this would mean a total additional spend of £962 million. A heat efficient house would also have seen higher bills but that extra cost would have been reduced to around £23.

The calculation for the UK's two million offices assumed a higher outside temperature of 5ºC as most offices are in built up areas and benefit from a 'heat island' effect. A 2ºC drop in temperature would have used an extra £284 million of energy to keep inside temperatures at 20ºC over the same two weeks, based on an average 1500m² office building. However the team also estimated that a particularly poorly insulated office could have cost an extra £149 to heat over that same period.

Ellie Horwitch-Smith, an energy management expert with Faithful + Gould, said: “As outside temperatures fall, the cold truth is that already inefficient buildings perform increasingly badly as heating systems struggle to maintain the indoor temperatures demanded of them. Heat is simply lost at a greater rate if the temperature drops”.

Horwitch-Smith added that while the £1.2 billion figure was shocking figure it is a very conservative estimate.