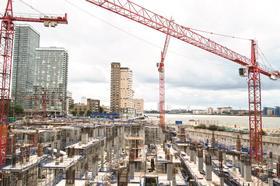 Commercial construction has seen the fastest rise in new work since October 2014, according to the latest Markit/CIPS survey.

Overall the seasonally adjusted output index registered 57.8 in December, up from a seven-month low of 55.3 in November.

Housing activity also increased at a robust rate, recovering from the 29-month low seen during November.

Meanwhile, construction companies have signalled a positive outlook for business conditions in 2016, with 51% of the survey panel anticipating a rise in business activity over the course of 2016, and just 7% forecasting a reduction.

“Commercial building was the main engine of growth, with this area of activity expanding at the strongest pace since autumn 2014.

“Across the UK construction sector as a whole, the latest survey indicated a strong degree of optimism about the outlook for 2016, with firms mainly citing a strong pipeline of commercial development projects and new housing starts.”

“For many the main objectives this year will be to continue improving margins, strengthening order books and jettisoning troublesome legacy contracts.

“There will also be hopes of further progress in the national infrastructure pipeline, including a decision on a new airport runway in the south east of England.”