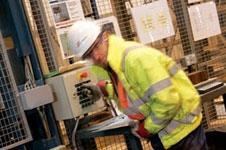 Construction activity fell at a record rate in February as weak global markets and the credit freeze drove down orders and purchases, according to new figures.

Data from the Chartered Institute of Purchasing & Supply (CIPS) showed the construction PMI index fell to a lower than expected 27.8 in February, down from 34.5 in January and lower than the previous record low of 29.3 in December.

The body said the rate of job losses also accelerated last month as new orders and output activity dropped and industry confidence had weakened since January.

Roy Ayliffe, CIPS director of professional practice, said “Abysmal February data from the UK construction sector marks a whole year of decline in the industry and has put paid to any hopes of improvement following a slight rise in the PMI index last month.

“It's safe to say that the construction sector is some way off being out of the woods as it continues to struggle with extremely weak demand.”

He said the housing, commercial and civil engineering sub-sectors had performed particularly badly and housebuilding performance was “appalling”.