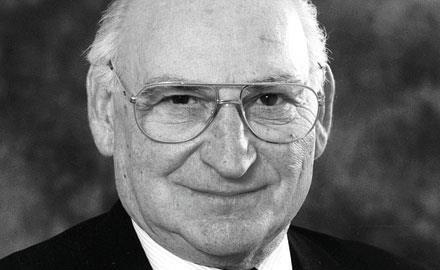 Sir Frank Lampl, one of the construction industry’s biggest and most respected names, has died aged 84. It is understood he had been unwell for some time.

Sir Frank, who spent 30 years rising through the ranks at Bovis to become chief executive, chairman and then life president of the group, passed away this morning.

Dan Labbad, Lend Lease’s current chief executive for Europe, Middle East and Africa has paid his respects to the late Sir Frank: “It is with much sadness that we have been informed that Sir Frank Lampl has passed away. Sir Frank was instrumental in building Bovis into a leading international construction business.

“His legacy will provide an inspiration for the industry and will remain a constant influence across the Lend Lease business. He will be sorely missed and our thoughts are with his family at this time.”

Born in Brno in the Czech Republic in 1926, Sir Frank spent his teenage years as a prisoner of war during World War 11 in two of the most brutal and infamous Nazi concentration camps, Auschwitz and Dachau.

His first construction job was as a slave labourer on an underground BMW factory near Munich.

After the war, during which the rest of his family was murdered, Lampl returned to Brno. But following the communist takeover he was considered a bourgeois undesirable and sentenced to imprisonment in the uranium mines of Jachymov until finally being granted amnesty on Stalin’s birthday in 1953. The condition of his release was that he had to pursue a career in either construction or mining. He chose construction

In 1968, Lampl and his wife fled Prague to avoid being caught up in a third oppressive regime. They came to the UK, to visit their son who was then studying at Oxford University and never returned.

Before then, he rose up through the ranks of the firm becoming chief executive of Bovis International in 1978.

Other successes while Sir Frank was at the helm included completing three substantial acquisitions in the US and, in 1991, winning the Atlanta Olympic Games construction management contract. Sir Frank also set up an operation in his former home town Brno and Bovis participated in several major Czech developments. Then, in1999, Sir Frank oversaw the sale of Bovis to the Australian retail real estate group Lend Lease.

He has remained a high profile industry figure since his departure from Bovis and was universally respected by colleagues, peers and competitors alike.