Construction output picks up in June 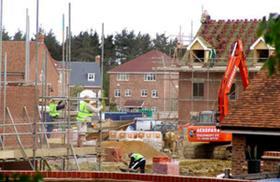 Strong housebuilding activity and a turnaround in the commercial sector last month contributed to the sharpest overall rise in construction output since November 2017.

And while 2018 began in spectacularly bad fashion for the sector thanks largely to the ’Beast from the East’, according to the latest Markit/CIPs Construction survey June also saw the strongest rise in new orders for 13 months.

The Markit/CIP UK Construction index registered a score of 53.1 last month versus 52.5 in May, above the 50 ‘no-change’ mark for the third month in a row.

Residential work remained the best performing area of activity, while commercial building also contributed to the stronger overall rise in construction output, expanding at the fastest pace since February.

But civil engineering activity rose only slightly in June, with the rate of growth easing to a three-month low.

Markit said: “UK construction companies indicated a rebound in business optimism from May’s seven-month low, although the degree of positive sentiment remained much weaker than the long-run survey average.”

Survey respondents cited infrastructure work as a key source of growth in the coming 12 months, it added.

Industry observers welcomed the upturn, but sounded a note of caution around some of the wider issues affecting the sector.

Mark Robinson, chief executive of Scape Group, said in order for the current momentum across the industry to be maintained the government had to provide clarity over its Brexit policy “to bolster confidence and provide certainty for the construction industry and the wider economy”.

And Robinson warned against politicising critical infrastructure projects such as Heathrow’s expansion. “Infrastructure improvements across the UK from new high-speed rail lines to local road improvements are pivotal to maintaining a buoyant and productive economy that is attractive to foreign direct investment,” he added.

Max Jones, global corporates relationship director for construction at Lloyds Bank Commercial Banking, said the bounce-back in the second quarter appeared to confirm that much of the weakness in the earlier part of the year was the result of shutdowns in the wake of the Beast from the East rather than anything more structural.

“But the sector is hardly motoring, with some large contractors blaming Brexit uncertainty for the delay or cancellation of projects. The London market also looks significantly exposed to any reduction in EU labour,” he added.

Blane Perrotton, managing director of consultant Naismiths, said: “The construction industry somehow skipped springtime this year – and has been catapulted from a polar winter into a heatwave.

“True, the figures are flattered by comparison to the weak data recorded at the start of 2018. But such solid improvements in both output and new orders reveal some genuine momentum.

“In part this is the release of pent-up demand, which has been building for months. There is only so long that investment decisions can be delayed, and on the front line we’re seeing increasing numbers of developers opting to pull the trigger before the opportunity passes them by.

“With the Brexit clock now onto its final countdown, there remains considerable scope for volatility in the months ahead and the challenge for the industry now is to hold on to these impressive gains.”