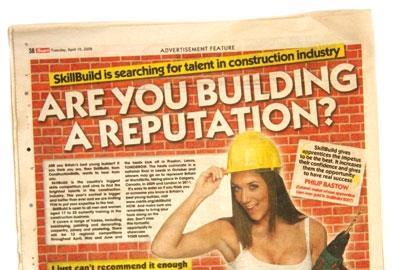 ConstructionSkills has been forced to apologise for an advert in The Sun newspaper that was accused of promoting a sexist view of the sector.

Mike Bialyj, advisory services director of ConstructionSkills, said the advert, which ran on 15 April and depicted a woman in a provocative pose, was “something we won’t be doing again”.

The news comes shortly after ConstructionSkills admitted it was missing its targets for getting more women to join the industry. It recruited 299 female trainees in 2007, down from 387 in 2006. It had set itself the goal of recruiting 463. The agency recently ran a £500,000 “Women in Work” campaign to persuade more women to take up trades.

Bialyj was challenged over the advert by Sandi Rhys Jones, a female partner at construction marketing consultant Rhys Jones Consultants, at a recent Housing Forum event.

Bialyj admitted that he had received a number of complaints, and said: “This is an image we’d rather not portray. The good work we’ve done over a number of years can easily be undone very quickly. It’s something we won’t be doing again.”

Asked by Rhys Jones if that constituted an apology, Bialyj replied: “Yes, of sorts.”

Rhys Jones said the advert was “tasteless and inappropriate”.

The advert was designed to attract entrants to the SkillBuild competition, which aims to reward the “brightest talents in the construction industry” between 17 and 22 years old.

ConstructionSkills levied £165m in 2007 from building firms to bring more recruits in to the industry.

Nicola Thompson, director of communications and marketing at ConstructionSkills, said the advert was aimed at existing recruits – most of whom are male.

She added: “We did not set out to cause offence … We will work closely with our media partners in the future to consider how we present a professional and diverse image of our industry."