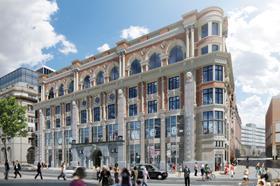 Architects 3D Reid, Roger Stephenson and Leach Rhodes Walker have also won a place on the scheme, known as Noma.

The news follows this week’s announcement that developers Delancey and Landid have been chosen as preferred bidders to partner the Co-Op in developing the scheme (pictured).

Roger Stephenson will work with architect Axis, a division of Sheppard Robson, on designing a £16m refurbishment of the Edwardian Hanover office, made up of two of the nine listed buildings on the site. Turner & Townsend is working as project managers while Davis Langdon will provide cost consultancy.

3D Reid, architect of the Co-Op’s £100m new HQ building is working on a four-star hotel, worth around £25m, which will be the first of two hotels on the 20-acre site. The other is being designed by Leach Rhodes Walker and will include a 850-space multi-storey car park below a three star hotel.

As a business we believe in building up long-term relationships

Ruairidh Jackson, strategy and development director for Noma at the Co-Op, said that the company was a “loyal client” and expected firms currently on the scheme to win more work on the huge development in the future.

“As a business we believe in building long-term relationships so we hope that teams that work well with us can work across the site,” he said.

However, he added that it was also important to be open to new partners with fresh ideas.