Exclusive: Bam has won the prestigious job to construct a new headquarters for London’s Metropolitan Police 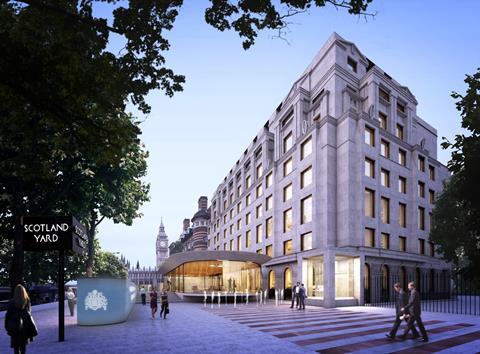 Building understands Bam Construct has been selected as main contractor for the job to create the new Met headquarters in the iconic Curtis Green building on the capital’s Victoria Embankment.

According to construction analyst Barbour ABI the job is worth £33m.

Bam won the job through the Improvement and Efficiency South East construction framework for major projects, with other firms on the framework including Mace, Morgan Sindall, Balfour Beatty and Willmott Dixon.

Last October architect Allford Hall Monaghan Morris (AHMM) was appointed to design the new Met HQ,  with the design featuring a new public entrance pavilion, extensions to the building itself and the creation of public open spaces.

The firm’s design will also see the famous rotating Scotland Yard sign retained, with the Curtis Green building to be renamed Scotland Yard once the Met move in.

In October, deputy mayor for policing and crime Stephen Greenhalgh said Scotland Yard was “returning to its historical home in Whitehall”.

“The new, smaller Met HQ will help deliver a 21st century police force and AHMM’s design, which includes a public space, will help Londoners to reconnect with the Met.

“By selling outdated and impractical buildings like the New Scotland Yard that are costly to maintain, we can reduce property running costs.”