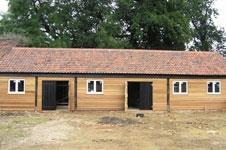 Contractor Chalcroft Construction is adding the finishing touches to the refurbishment of a medieval barn into a food preparation area.

Although the barn, due to be completed later this month, will be used for packaging and processing, it will retain many of its historic features, including its existing roof structure.

Salle Moor Hall Farm, near Reepham, is a mixed farm which produces cereal grains, peas and beans, fresh vegetables, beef, lamb and eggs, using organic methods. It distributes hundreds of boxes of organic foods across the region every week.

General manager Giles Blatchford said: “It is important that the barn remains in agricultural use when so many it seems are being turned into holiday lets or countryside homes."

Blatchford said the new barn would also act as an educational centre so that people can learn more about where their food comes from, "closing the gap between farm and dinner plate”.

Andy Hardy, from Chalcroft, added: “This is a great project to be involved with as we have to utilise our modern construction skills while doing nothing to detract from the character of the building.