The team, which features Balfour Beatty, Vinci and Systra, is looking for a firm to carry out £30m of work to buildings to the east and west of the main Old Oak Common station building (pictured). 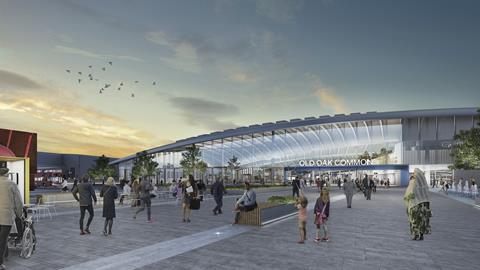 Work will be split across the two sites and will deal with buildings providing ancillary functions to the station, including housing electrical transformers, chiller plant rooms, evacuation routes for the underground station as well as facilities for train and bus drivers.

>>> In pictures: How the area around HS2’s Old Oak Common station will look

The entire station scheme has a price tag of £1.3bn and will feature 14 platforms, six of which will sit within a 750,000 sq m ‘underground box’ and service the HS2 line.

WSP and landscape practice Grant Associates are responsible for designs for the public realm spaces.

The contract for works on buildings in the public realm is set to run from September 2024 to January 2028. Firms have until 22 July to bid.

2,720 square metres of solar panels on the roof