Aecom has been drafted in to inspect Amey’s work 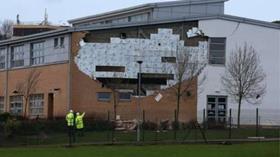 The PFI consortium responsible for structural defects across a spate of Edinburgh schools has agreed to sweeping concessions in a settlement with the local authority.

Edinburgh Schools Partnership (ESP) operated 17 schools which were forced to close in 2016 following the discovery of defects after a wall at one of them, Oxgangs Primary School, dramatically collapsed (pictured).

When the schools were built ESP was formed of Miller Construction, bought by Galliford Try in 2014, and Amey, who later pulled out of the consortium.

ESP built 13 of the closed schools, with the remaining four built exclusively by Miller.

A settlement report published by client Edinburgh council does not include monetary details but alludes to cash compensation, work by ESP that will go unpaid, as well as further contractual requirements.

Part of the agreement sees a third-party, Aecom, drafted in to inspect the work on ESP’s FM sub-contractor Amey.

The settlement states: “This new regime includes quarterly checks on Amey’s monitoring of, and compliance with, the contract, coupled with random or targeted sampling of the works and services undertaken by Amey. This will all be at ESP’s expense.”

A report by architect John Cole, published last year, found that “poor quality construction” was responsible for the collapse of the Oxgangs Primary School walls.