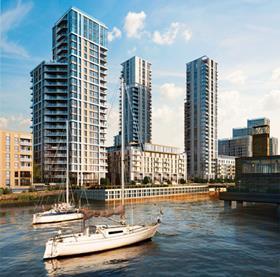 Hong Kong developer Knight Dragon is accelerating development of the £5bn Greenwich Peninsula scheme in South-east London, with the appointment of three contractors to the 500-home second phase of the scheme, worth £141m, writes Iain Withers.

Knight Dragon has appointed Wates and GB Building respectively to build out £60m and £31m plots of the second phase, called Peninsula Riverside, Building can reveal.

The news comes after Kier announced on Monday it had been appointed to a £50m plot of the scheme (pictured), comprising 224 apartments across four blocks, the tallest of which will be 24 storeys.

In total, Knight Dragon will create 60 development plots in Greenwich Peninsula by 2039.