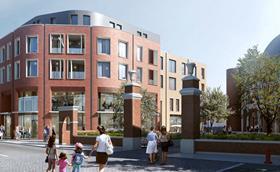 Braintree council is looking to appoint a contractor to carry out a £20m overhaul of the town’s centre.

The authority wants a contractor for the detailed design and construction of Manor Street, which is located in the south-eastern corner of the Essex town.

Plans for the redevelopment, which have been drawn up by AHR Architects, include a 70-bed hotel, 35 apartments, a new bus park and retail units.

The designs also include a Livewell Hub, which will combine a GP surgery, chemist as well as providing some other NHS services.

Plans were submitted for planning last month, with a decision expected on 23 October.

A shortlist of a maximum of five bidders is expected to be announced on 5 November, with companies having until 7 September to express interest in the job.

The contract is expected to run for two years.