Confidence picks up despite Brexit uncertainty, according to the latest IHS Markit/CIPS data 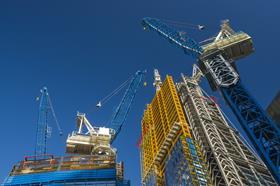 Business confidence among contractors is rebounding thanks to anticipated infrastructure spending, despite December rounding off a difficult year for construction output.

A strong performance for civil engineering activity last month was offset by a slowdown in the growth of housing and commercial sectors, according to the latest IHS Markit/CIPS data.

The pair’s PMI index registered a score of 52.8 in December, down from 53.4 in November, meaning construction continued growing for a ninth consecutive month, although progress was the slowest in three months, capping a year of cautious expansion with commercial building suffering its lowest increase in activity since May.

Also read: Output grows as activity expands across the board despite Brexit nerves

A lacklustre economy and political uncertainly, notably around Brexit, continued to hang over the sector as clients postponed investment decisions.

But against this background IHS Markit said business optimism had rebounded to an eight-month high in December, the highest since April and well above the near six-year low seen in October, as firms looked ahead to major infrastructure projects, with work continuing on HS2 and Crossrail throughout the year and Heathrow, Gatwick and Stansted airports all looking to expand.

The year could also see a go-ahead for energy projects from wind turbines and tidal lagoons to a new nuclear station after Hinkley Point C.

Mark Robinson, chief executive of Scape Group, said: “While gloomy economic conditions, political uncertainty and the traditional Christmas slowdown all contributed to a lull in overall construction output in December, this blip looks temporary as business optimism reached its highest level since April.

“But as industry optimism is pegged to large-scale infrastructure projects, it is essential that the government commits to their delivery and projects don’t fall by the wayside due to the electoral cycle,” he added.