Costain may have to make a series of smaller bolt-on acquisitions if it is to achieve its long-term growth strategy in the wake of further rejection by consultant Mouchel, say analysts.

The contractor put in four bids for Mouchel, the last priced at 155p a share, mainly in the form of Costain shares. In a statement on Tuesday, to accompany its six-month results, Mouchel shunned Costain’s most recent offer, along with a 135p per share rival offer by Interserve, in cash and shares.

Both bidders had lowered their bids after doing due diligence on the consultant. Mouchel also revealed that an overseas bidder had walked away because of the weakness of the UK market.

Costain has a stated aim of operating through the entire construction life cycle from front-end engineering consultancy and design, through construction to back-end care and maintenance. Andrew Wyllie, the firm’s chief executive, has said that the firm would pursue other targets if the Mouchel bid failed. Mark Fleetwood, analyst at Brewin Dolphin, said Costain’s cash-rich position meant it could pursue another acquisition.

Andy Brown, an analyst at Panmure Gordon, said the targets would probably be smaller than Mouchel as the firm did not have many other options. “The problem is there isn’t any other Mouchel-type fit out there. In recent results they have indicated other options, which [is likely to mean] acquiring smaller firms.”

The rebuttals end a four-month takeover saga. Analysts suggested it was unlikely to result in a hostile takeover of Mouchel. Chris Banbury at Peel Hunt said that it was now expected Mouchel would remain independent.

“Perhaps [Mouchel] overplayed its hand when it thought it had three bidders,” he said. 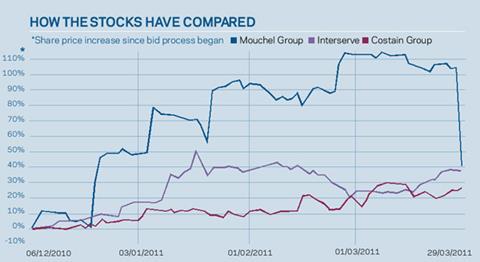 1. Acquire another consultancy business like Mouchel. The problem is there aren’t many other businesses with the smaller firm’s profile.

2. Bid again. The fact that due diligence led both Costain and Interserve to reduce their offers suggests that Costain may be less interested than it once was in making an improved friendly bid. However, as Mouchel is listed Costain could go hostile, particularly if the former firm’s shares drop below 50p.

3. Make a series of bolt-ons of privately-owned consultancies. This is the most likely option for developing its consultancy business.