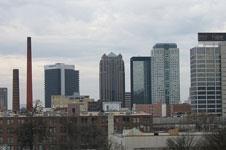 Birmingham City Council has apologised for printing the skyline of Birmingham, Alabama on 700,000 recyclng leaflets

Birmingham City Council has had to admit to an embarrassing error after sending out over 700,000 leaflets to residents with a photograph of the city’s US namesake Birmingham, Alabama on the front.

The mistake cost around £15,000 as the pamphlets went out thanking residents for their efforts recycling with a photograph of the wrong Birmingham skyline. Above the photograph was the message “Thank You Birmingham!”

In the first instance City council officials claimed no mistake had been made and the skyline was meant to be generic and was just a way of representing an urban area.

When this didn’t wash a spokesman admitted today the authority was at fault: "Birmingham is immensely proud of its recycling record and this leaflet has helped to get the recycling message across to thousands of our enthusiastic citizens over the last 15 months," he said.

"We accept that the wrong photo was used, but the text and detail contained in the leaflet is wholly correct which is the most important message."