Westminster says it is monitoring situation at Soho scheme

Westminster council says it has posted staff to maintain relations between builders and locals as anger grows over delays to a major mixed-use scheme Interserve is building in Soho.

A 110-bed Premier Inn, due to open last autumn, is one part of a redevelopment being built by the firm and which has been delayed by water ingress and problems with structural steel works.

Residents told Building they are getting fed up with the “endless delays” on the scheme, while traders on Berwick Street market are angry about the noise and dust produced by construction work.

Westminster council, which owns the freehold on the site, has stepped into the row, saying it is “extremely frustrated” by the delays, telling Building it “understand[s] the difficulties this work has caused for local residents and businesses”.

And it added: “We have introduced additional staff to improve the relationship between the contractors and those nearby and continue to monitor the situation.”

PMB Holdings, which is developing the scheme, said the work is now “anticipated to be finished by the end of the year”.

It had been due to finish last year but has bust a number of deadlines.

The job, on the street made famous by the cover for the Oasis album (What’s the Story) Morning Glory?, also includes a number of retail and residential units.

A spokesperson for Interserve said: “We are working closely with the client towards completion.” 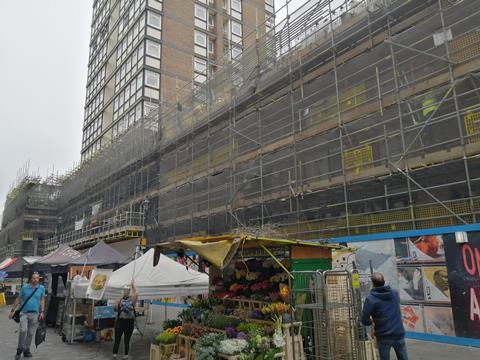