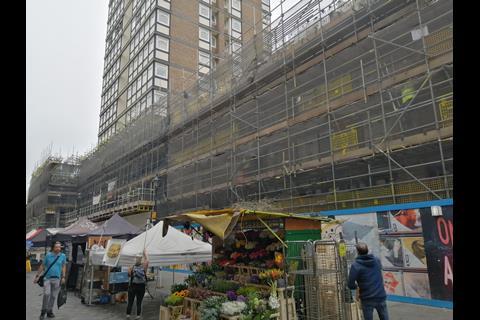 Market stalls line Berwick Street by the development. All pictures were taken on Wednesday 26 June 2019 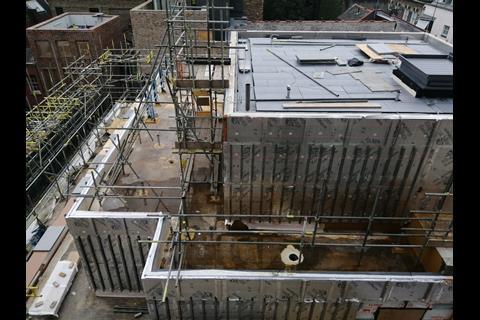 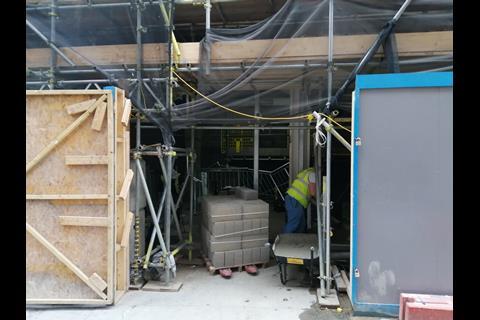 A view into the ground level of the development. 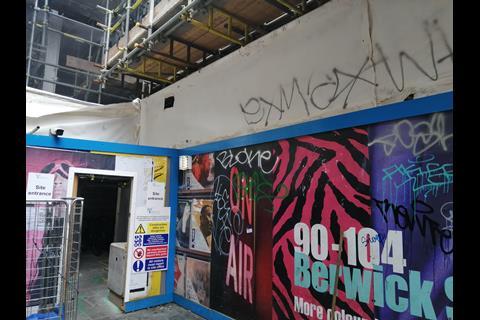 Hoardings were erected on the site in 2015. 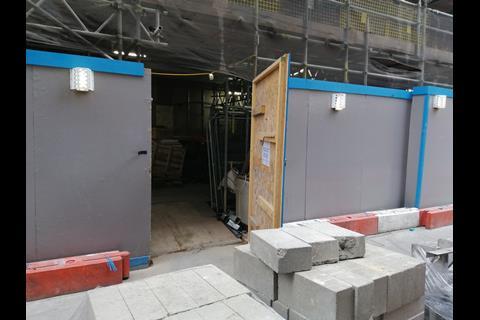 A palette of breezeblocks sits outside one entrance.

A £25m scheme Interserve is building on a London street made famous by the Oasis album (What’s the Story) Morning Glory? has been delayed again because of ongoing problems with water damage.

Interserve has spent £35m in the past two years pulling the plug on its London construction business but the job on Berwick Street in Soho, which began in February 2016, continues to dog the firm with completion of the 110-room Premier Inn hotel now set for the end of this year, having originally been due last year.

Last autumn the budget hotel chain’s operator, Whitbread, admitted it was up to 10 months behind schedule and in March developer PMB Holdings, which is owned and chaired by property magnate Peter Beckwith, said the new opening date would be by summer, blaming the delays on “damage to installed materials as a consequence of water ingress”.

It added that the building’s roof was due to be completed by the middle of April.

But PMB has admitted the job, which also includes 14 retail units and 16 homes, is now “anticipated to be finished by the end of the year” with work to take scaffolding down due to start by the middle of this month as “the final roof finishes are nearing completion”.

In a statement, it said: “The contractor has experienced issues with water ingress that has required replacement of some of the internal finishes. PMB Holdings is continuing to work with the main contractor to complete the works at the earliest opportunity. The scheme is anticipated to be completed by year end.”

Construction has long been beset by problems, with steelworks previously having to be ripped out after incorrect groundwork measurements.

And a resident of Kemp House, the tower block in the middle of the site, said the roof of the scheme lacked visible drainage – and that sections of it filled up “like a swimming pool” every time it rained. “The delays are endless,” he added.

Another told Building: “The hotel rooms have been put in four or five times. Every time it rains more plasterboard is ripped out and broken up.”

PMB is developing the scheme in a joint venture with the landowner, Westminster council, while the project manager is GVA London Second Wall and the QS is Gardiner & Theobald.

A spokesperson for Interserve said: “We are working closely with the client towards completion.”