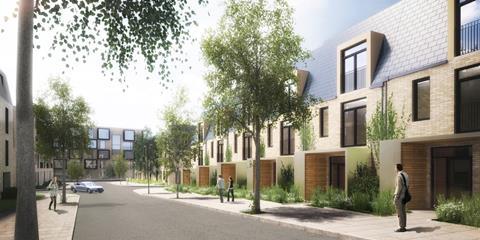 Barnet council gave permission for the scheme in Chipping Barnet, which will involve the demolition of the 436-home social housing estate with a mixed-tenure development designed by Alison Brooks and HTA.

The first phase will include 21 four-bedroom, 41 three-bedroom, 34 two-bedroom and 12 one-bedroom homes, including both flats and traditional houses. The scheme will also see the construction of new green spaces and community facilities, including a community centre and pre-school nursery.

Richard Cherry, deputy chairman, Countryside Properties said he was “delighted” that the Council had approved its planning application. “The regeneration will create a sustainable development of a 21st Century suburb which will bring great benefits to the wider community of Chipping Barnet,” he said. “We are particular pleased that residents will shortly see work start on site.”

Nigel Eade, Chair of the Dollis Valley Partnership Board, said:  “As a resident of Dollis Valley and someone who has been working on the regeneration plans for more than ten years, I am delighted that these proposals have won consent. This regeneration will deliver a vast improvement compared to the existing Dollis Valley estate.”