Major milestone at Liverpool Street station as platforms are pieced together 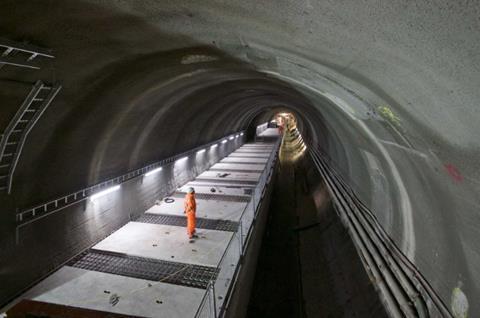 Crossrail is almost 75% complete and is still on time and on budget, according to the company behind the £16bn project.

Crossrail Ltd said the scheme is on track and has now entered the fit-out phase in both the stations and the tunnels.

Platforms are now complete at all central London stations from Paddington to Woolwich, apart from Whitechapel, where construction is ongoing.

A major milestone has also been reached at the Liverpool Street station with the completion of two new 240m long platforms over 30m below ground (pictured).

The platforms were pre-fabricated in more than 500 pieces at a factory near Sheffield, before being transported to London, lowered down the station’s main shaft and pieced together below ground.

The new platforms have taken around four months to install and are around twice the length of many existing London Underground platforms to accommodate the new 200m long Crossrail trains.

Rohan Perin, Crossrail project manager at Liverpool Street station said: “Assembling the two platforms piece by piece over the last few months has been a bit like putting together a giant jigsaw puzzle.

“Prefabricating and then assembling the sections together on site has meant that we can get on with the job quickly and safely.”