Crossrail has said spending delays have not slowdowned the programme

A slowdown in spending would put Crossrail at risk of further delays, Jacobs has warned.

The firm, which has been appointed by Transport for London (TfL) and the Department for Transport (DfT) to oversee the £19bn project, said there were concerns that a slowdown in project outturn signalled that the end of the project could be slipping further behind schedule. 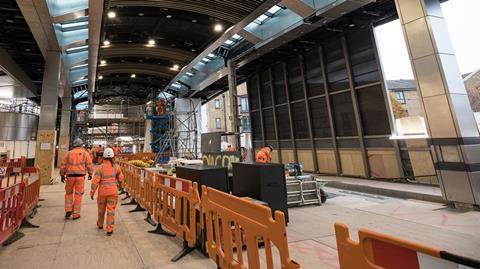 Crossrail is now expected to open in the first half of 2022, more than three years late

In its latest report, which covers the period from 23 August to 19 September, the consultant said there were also concerns the situation could be worsened by the fact the project still needed to be fully priced.

It said: "The current reduction in the spend rate over [the] last two periods is indicating potential schedule prolongation.

"This situation is likely to be exacerbated, as we expect cost-to-go to increase, following the completion of the final pricing of a fully-scoped and underpinned assured delivery control schedule (DCS), with the corresponding risk assessments and the consideration of the cost pressures."

It also said risk as a percentage of the cost-to-go was increasing and that while this was significant at this stage of the project, it was difficult to give a level of confidence the risk provision provides.

In its response Crossrail said the underspend had not resulted in the timetable being materially changed.

It said: "There have been small underspends compared to forecast in recent periods. This is not a result of changes to the critical path of the schedule which remains in line with the DCS."

The Crossrail response also alluded to the project's tight finances, saying that its investment authority (IA) limit was exhausted and there were project IA requests in the pipeline of an undisclosed amount.

It said: "This is being managed on a day to day basis by reallocating IA between projects, an approach that is ceasing to become sustainable. If not rapidly resolved it could lead to adverse impacts on cost and schedule."

Negotiations between Crossrail, TfL and the DfT about funding the remainder of the project are ongoing.

The railway was due to have opened two years ago but has been delayed until the first half of 2022.