Crossrail has found evidence of humans living on the Thames 9,000 ago at its site in North Woolwich 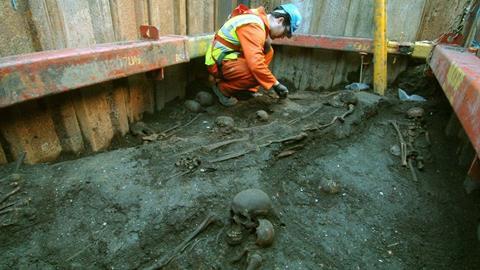 Archaeologists on the project uncovered a tool making factory in South East London with 150 pieces of flint including a number of blades.

Jay Carver, lead archaeologist at Crossrail, said it was a “unique and exciting find” that reveals evidence of humans returning to England and in particular the Thames Valley after a long hiatus during the Ice Age.

“The concentration of flint pieces shows that this was an exceptionally important location for sourcing materials to make tools that were used by early Londoners who lived and hunted on Thames Estuary islands.”

Crossrail has also discovered its first piece of gold on the project - a 16th century gold coin that was used as a sequin or pendent, similar to those worn by wealthy aristocrats and royalty.

Discovered at Crossrail’s Liverpool Street station site, it is unknown how such a precious and expensive gold item made its way to what was then regarded as a deprived area.

Archaeologists have also uncovered an exceptionally well made Roman road, where a strange find of human bone in the foundations has surprised archaeologists.

Roman horse shoes have also been found in the road.

The bone is suspected to have come from a nearby Roman cemetery, located about 50 metres from the archaeology site, and was found in the layers of rammed earth, clay and brush wood which made up the road.

The bone may have been washed out of the cemetery by the River Thames tributary, the Walbrook, which was responsible for depositing skulls downstream that were originally thought to be heads of Boudicca’s victims from the revolution in the 1st Century.

Archaeologists are hopeful that when they start large scale excavations to remove 3,000 skeletons from the 17th Century burial ground next year, they will also locate more of the Roman road, along with foundations of Roman buildings that stood alongside the road.