Crossrail 'on track' despite halt to both tunnel machines 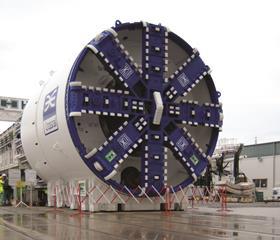 Crossrail has insisted the project remains on track, despite having stopped both its tunnel boring machines while a backlog of waste material at its surface is cleared.

In September the project suffered a failure of one of its hoppers that loads waste earth onto trains to be removed from the site, meaning it had to stop one of its two tunnel boring machines to relieve pressure on the earth removal operation, where an excavator is now being used to load the wagons - a less efficient method of working.

But it has now stopped both machines to allow it to clear the backlog of earth.

Crossrail and tunnelling contractor BFK, a Bam Nuttal, Ferrovial and Kier, joint venture, are confident they will start tunnelling again within days.

Keith Sibley, area director for Crossrail in the west, said: “While work is underway to bring the Westbourne Park train loading system back into use, we have been temporarily using lorries to reduce a stockpile of excavated material at Royal Oak. [Boring machine] Phyllis has been temporarily stood down to allow the site team to focus on excavated material removal at Royal Oak.

“Tunnelling will recommence in the next few days as this particular stockpile will have been sufficiently depleted.”

Crossrail said the temporary stoppage would not affect the timetable for constructing the east-west line’s western tunnels, which are scheduled to be complete in late 2013.