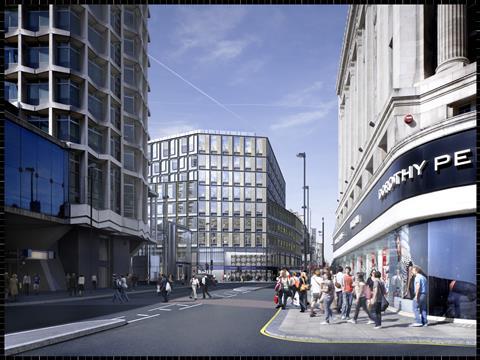 Crossrail has submitted a major planning application to Westminster Council for the regeneration of Tottenham Court Road and the East end of Oxford Street, including the former Astoria site.

They will comprise 500,000 sq ft of premium retail, office and residential accommodation, which will cover four blocks, boosting the economy in the eastern end of Oxford Street and Tottenham Court Road. Two blocks have been designed by architects AHMM, and two by Hawkins Brown.

A new 350-seat theatre is proposed for the old Astoria site, and Derwent London has reached an agreement with Nimax, who will operate it.

London Underground and Crossrail also propose to renew and upgrade the public spaces around the eastern ticket hall and St Giles area.

An open pedestrian space linking Soho Square and Charing Cross Road will create new views of the Square and of St. Patrick’s Church, and a public piazza will be created to provide a distinctive new landmark for the West End.

In total, £1bn is being spent to build the new Crossrail station and enlarge the tube station. The private sector-funded over-site developments will be built once work to construct Tottenham Court Road station is complete in 2017.

Mayor of London Boris Johnson said: “The east end of Oxford Street has long deserved the economic boost, improved public space and glamour these plans will deliver. It will be a gleaming example of the opportunities that will follow the route of this new line, as well as offering the facility to zoom from one side of London to the other at record speed.”

Ian Lindsay, Crossrail Land and Property Director, said: “These development plans will enhance Oxford Street and Charing Cross Road as a thriving cultural and retail destination. The quality of the new commercial space created will help attract major retailers to the eastern end of Oxford Street and boost the wider regeneration of the area.

“Crossrail will be submitting further above ground development planning applications for other station sites in central London over the coming months including at Bond Street and Farringdon. This will help us to make the most of the development and regeneration opportunities Crossrail is bringing to London.”

Tottenham Court Station is presently used by around 150,000 passengers per day. That number is expected to rise to more than 200,000 when Crossrail services commence in 2018.