Cullinan’s polystyrene bird is not be trifled with

The Cullinan Bird on the runway 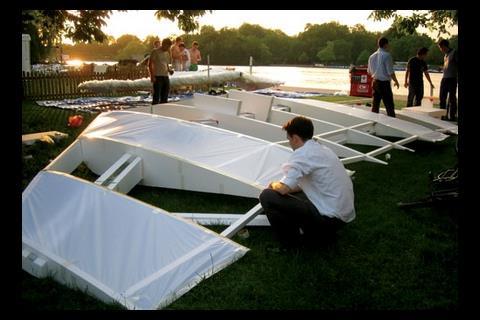 The Cullinan Bird being assembled.

It may have got the aesthetic nod over a giant trifle and soared a record-breaking distance, but a poor pre-flight dance meant the giant polystyrene bird designed by Edward Cullinan Architects missed out on the top spot at last weekend’s flying competition in Hyde Park.

The architect teamed up with Ramboll Whitbybird and Element Energy to take fifth place in the Red Bull Flugtag tournament on Saturday. The machines, which have to be powered by a single person, were judged on the stylishness of their design, the distance they covered and how well the pilot danced before the launch.

The “Cullinan Bird” wowed 80,000 spectators by travelling more than 39m before landing in the Serpentine, by far the longest flight of the day.

The machine, which was 4m long and had a wingspan of 9m, was partially made of polystyrene provided by Cordek, a supplier of specialist expanded polystyrene products for the construction industry.

Philip Graham, an architectural assistant with Edward Cullinan, was chosen to pilot the craft because he had “done a bit of paragliding”. But Shane Slater of Element Energy, who used to work for Boeing and has a degree in fluid dynamics, led the design.

“We’ve spent about 10 evenings and three weekends on it,” said Henry Pinder, an engineer at Ramboll Whitbybird. “There were usually about six of us at any one time, and we had a whole bunch of design meetings before that.”

Roddy Langmuir, a director of Edward Cullinan Architects, added: “One person can lift this craft fairly easily, which is quite an achievement considering it’s got a wingspan of 9m.”

The engineers and architects were not the only industry representatives at the event. Surveyors from Plowman Craven were also invited to Hyde Park to assess the distance travelled by the machines. But the competition was not judged on distance flown alone. The “level of creativity” was also considered and points were awarded for the entertainment value of the “pre-flight performance”.

While the Cullinan Bird scored highly in the first category, it failed to impress the panel of celebrity judges – including Jodie Kidd and Fame Academy’s Carrie Grant – with a bizarre spacesuit dance.

A giant toilet which toppled straight off the 6m ramp into the Serpentine received a high score for its 30-second dance routine.