In an interview with Building, Webster said the firm would consider merger offers but added “it is not something to get excited over at this time”.

But he added the firm was actively considering acquiring smaller firms to become a “global business” and had a line at the bank for deals.

“We are always on the lookout for the right opportunity,” he said.

The news comes after WSP told Building last week it was open to a merger deal, while last month EC Harris admitted it had been talking to other companies over a possible merger.

Cyril Sweett published results this week for the year ending 31 March 2011 boosted by its acquisition of Chinese consultant Widnell, showing revenue up by 11% to £72.8m from £65.6m.

Webster said the strong results partly reflected the successful integration of Widnell, which had “exceeded expectations.”

The firm plans to expand its operations in China, increasing its offices there from nine to 12.

The number of staff at the firm’s Chinese business jumped from 380 to 460, partly as a reflection of the takeover of Widnell.

Among other opportunities being assessed is expansion in Saudi Arabia and a return to Egypt after the firm evacuated during political turmoil earlier this year.

Webster said: “Saudi Arabia is a tremendous opportunity for growth for us off the back of the work we are doing there.”

Speaking about the UK, Webster said: “We have seen a stabilising of our order book. Health and education are holding up well and we’re seeing improvement in the private market.”

The group confirmed it is to drop Cyril from its brand as part of a consolidation exercise that will see all of its arms operate under the Sweett Group name. 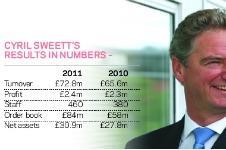